Got my bib number yesterday. I know that readers will be as relieved as I am to discover I am starting in Wave 4 (the last wave) at 10.55am which I am designating the warmest start time. Although depending if I can run down Katie Holmes’ time or not it may also be the designated coolest finishing time.

The Professional female group start at 9.10am even before Wave 1 (when the Professional men start) and given the fastest time for a New York Marathon by a woman is 2 hours 22 minutes, all the pressure of competing for the podium is taken away by knowing that by the time I probably cross the starting line (can take up to 15 minutes) the first woman will be pulling into Central Park to saunter her way to the finish. Phew, good to know I can just concentrate on running my own race from that point.

The bib features important information such as your wave, start and corral number and the magic option – No Baggage. 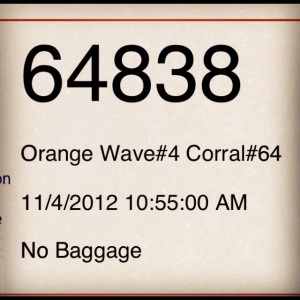 The No Baggage policy was announced earlier this year by the New York Marathon organising committee – and then reversed because of its unpopularity with runners. You can now ‘opt in’ to have your baggage (phones, extra clothing, reading material) transported to the end from the starting point, where based on previous years, you may have to wait for up to an hour in lines to retrieve it. Anyone not specifically opting in has a default of No Baggage, which sees you able to exit Central Park pretty much immediately after you get handed your giant pumpkin poncho as seen below. Gotta love a sponsor whose colours are orange and blue, thanks ING.

The poncho is the replacement for those clothes you didn’t pack in a bag and transport to the end. It is described as ‘water repellent, hooded and fleece lined garment that goes from head to knees and has pockets’.

No mention of its ability to be laundered. After wearing post race I am not sure of any future potential unless it can be washed, airing I don’t think would work. Not wearing it will not be an option, remember it will be about 5 degrees.

If you want to see a photo of me wearing the orange poncho you are going to have to sponsor me. I am not going to be bandying those around the internet for free thats for sure. There are plenty of spots for sponsorship left to reach my target of 42 kilometres, 42 sponsors and 42 screening sponsors.

I defaulted to No Baggage – which may be a good thing or not. I’m not sure the things I would have liked to have checked in, twenty kilos (currently attached to various inconvenient parts of my body) and my mental state would have been easily parceled up into the designated sized bag at the start line. I may have also conveniently forgotten to collect at the finish…..

I spoke with my Mum last night, the palliative care doctor had been for a long visit the day before, he now apparently also has the New York Marathon as a diarised date. At this moment in time the team in Australia – Team Terrie – are in agreement, I should run this marathon. Of course as end stage bowel cancer isn’t an exact science, its just an awful f*cking disease, things may change and I continue to make my decision on a daily basis.

I am running the marathon because I have trained for it (in a fashion).

I am running it to raise funds and awareness of the importance of early detection of bowel cancer on behalf of the Jodi Lee Foundation.

Bowel cancer an insidious disease that took my gorgeous friend Jodi and is going to take away my amazing and irreplaceable mother.

Bowel cancer that my beautiful friend Sarah spent most of this year fighting away.

I am running it because my mum told me its what she wants me to do, and while I have spent much of my life deliberately ignoring things she says to me, this time I will listen to her.

3 thoughts on “No Baggage”